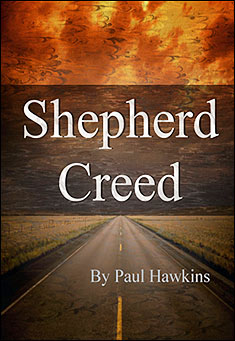 The adventures of a man wound one notch too tight chasing ambitions one notch farther out than he can achieve. He designs roads for the state but has no idea where he wants his own life too go. Shepherd Creed is earnest to a fault, loyal to his friends, and the terrible swift sword of justice to his foes.

My name is John Smart, and I knew Shepherd Creed as well as any man during his life, and I want to tell his story as best I can, because in the end he was a good man in precisely the sense of how 'good' ought to be. Not great, not flashy, but good in the way one of those stoical saints is good. He may even have been great, but he never would have admitted how great he was. That would have been showy.
He was also a “career man” of forty years with the same place of employment, and to achieve great things in that most banal of circumstances is a tribute to his optimistic human spirit. Lesser men have turned completely ashen under such circumstances, but Shepherd achieved his own quiet kind of triumph.

It was autumn and the fields that ran away on the horizon were as brown and striated as the shell of a chestnut. Orange leaves hung on the trees and fell here and there and chattered along the ground.

The boy, who was maybe twelve, sat beneath a pin oak with a mostly dry creekbed behind him and an old Model A in front of him on the road. It was his father's car and it had survived across many years and many owners and many miles. It may even have been held together by rust. A faded tractor rested in the field across the road, and his father had left with the car while he walked to the farmhouse for assistance with his broken vehicle.

A red dirt road that ran before him, but the real roads were coming here, the boy thought, the paved roads. The roads were to be built by the state – roads of tarmac forming endless gray lines webbing the state, linking town to town, county seat to county seat, center of industry (such as they were) to center of industry. They were to link farmers to markets, grain to elevators, businessmen to businessmen, and Wells Fargo wagons to people everywhere.

The boy's father, Robert Creed, had sat at the dinner table one night and proudly told the boy how lucky their town was that it would get a road. Roads meant growth and money and progress. Some towns, already passed by time and trade, would not be blessed by the presence of a state road and would hasten in decline. Towns that were not a county seat or that had merely offended a state dignitary might see themselves passed by. But their town didn't need to worry about that, his father said – they were strong social democrats. And so one of the magic roads would be here, the boy thought, a slender pipeline leading to the places where important people might be. Even in his young mind he admired the project's engineering and design. The significance of the road system was marvelously important for a thing to be made of asphalt.

The boy had the misfortune to be named Shepherd Creed. It was too pious for the decidedly mechanistic boy, but his grandmother had been an agitator in the Women's Christian Temperance Union and his mother, who was a tall thin woman with pale hair in an Amish style, wore her mother's indelible stamp. The grandmother had stood next to Carrie Nation fighting the devil in a bottle, and her soul had enjoyed being fanned to a fire of righteous indignation. If the heady wars of temperance, fought in the dirt and grime of saloons, had been completed by the time of the mother, they were replaced by the quiet broader work of moral temperance; negation gave way to the slow and steady march toward purgation and perfection, the work to winnow away the remaining illusions and turn the soul away from the eyehooks of the world.

The father was in many ways the mother’s temperamental opposite. He had no high ideals. He enjoyed planting, hunting, reaping, and repairing – all in the shadow of the low hills that began to roll green and verdant in Eastern Oklahoma. He was a man of thrift not given to drink or gambling, not so much because they were sins but because they were a waste of money and effort. He spent his days in the fields and his nights in the old out building, by lantern light, sharpening or fixing his tools. He valued not being beholden to other men. His hands were calloused and often greasy. The wife saw in his self-control the natural suggestions of preternatural rectitude. If she was holy he was good, like the classical philosophers who had not known Jesus, which is all a circuitous way of saying he did not like church much.

The son, Shepherd Creed, had button bright eyes of light brown and curly brown hair – from his frame you could see that he would be a sturdy boy and a strong young man. But his bright eyes showed more intelligence and curiosity than they did the poetic sense of wonder that often leads to the door of religion, yet he had a kind of wonder at the disciplined inspiration to accomplish physical achievements. The innovators were more than engineers. They had a mind’s eye that could see a better place.