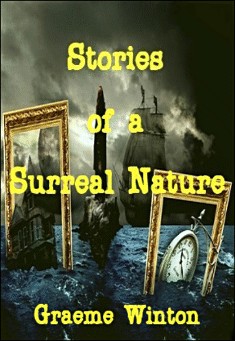 Stories of a Surreal Nature
By Graeme Winton

A number of peculiar stories I have written and mulled over. Some are fictional others are true, but the end result in both cases is unsettling and occasionally humorous.

Two white clouds settled below the Sun as a small red van drew up beside a 1960s bungalow in Bellvedere Crescent. Two children ran past pulled by a golden labrador. Dave Gardner sighed as he turned the engine off and pulled the key out of the ignition. He ran a hand through his thick brown hair and opened the driver's door.
The electrician headed along a path which split the front garden of the house into two perfect halves. Reaching the door he peered into a large darkened window as he rang the bell. After a moment a dark-haired man in his mid-thirties answered.
“Mr. Leakey?” Dave asked.
“Ah yes! Come in.”
“You wanted an extra socket in the living-room?” Dave asked as he passed the man, who then closed the front-door.
“Yes, in here,” said Leakey striding into a large room at the rear of the property. “So many electrical things these days. Could you put one here please,” he said pointing at a spot on an inner wall.
Dave hammered on the wall with the side of a clenched fist. “No problem, I'll take a spur off one of the other sockets.
Back at the van, Dave grabbed his tool bag and a reel of cable. His mobile bleeped, and he skimmed a text before heading back into the house.
After knocking a hole in the chosen spot Dave fed the cable into the founds of the living-room. He removed a socket from another wall and headed off to find a hatch. In the kitchen he pulled up the lino in a cupboard and prised up the sawn floorboards, then with a torch he lowered himself into the dark.
The electrician crawled through an opening in the foundation-wall of the kitchen into the hallway area and then through an opening into the living-room. He saw the cable dangling in the gloom just where it should be.
Brian Leakey stumbled over the piece of lino discarded in the kitchen and, noticing the open hatch, he retrieved a hammer from a drawer.
“Someone could get hurt with this open,” he said to himself as he hammered the floorboards back into place. He then placed the lino back in the cupboard.
“What the fuck!” Dave shouted on hearing the hammering.
He abandoned the cable and wriggled about then crawled back across the living-room area, through the hall and into the kitchen foundation. Reaching the hatch he battered on the under-side, but couldn't put much strength into it because of the limited space.
With growing panic and claustrophobia he shouted, but bizarrely heard the muffled strains of John Lennon's 'Imagine'.
Above, after tidying up and making sure everything was in place, Leakey had stretched his fingers. Then, sitting at the upright piano in the lounge, he played.
Below, Dave stopped shouting and reached for his mobile. Panic ensued when he couldn't find it in any pocket. He must have absent-mindedly left it in the van after reading the last text.
After what seemed like hours the music stopped. He shouted at the top of his voice while hammering on the floorboards. He crawled around under room after room looking desperately for a way out. An appalling hour later Dave stopped and stared into the darkness of despair; his torch had given up earlier. He turned on his side in disgust. In the foundation's corner he was in lay a heap of rags. He wriggled over hoping that a workman had mistakenly left tools; but as he pulled on the rags, a skull swung round causing him to jerk back. He then felt bony arms in old sleeves. “A body!” He shouted to himself as the terrible consequences of the situation struck him.