After twenty years on the front lines of a dangerous profession, Derrick Olin thought he had seen and heard it all. But he couldn't have been more wrong. They call themselves Purist Black, an extremist paramilitary group made up of former soldiers and marines, and oh yes, every one of them is black! Their mission is simple: to halt the corruption of their race. Their target: prominent black women who engage in miscegenation. Their obstacle: Birmingham's best bodyguard! Derrick is hired to protect a powerful woman who finds herself in the crosshairs of this group of blood-thirsty racial puritans, and soon he finds himself right in the line of fire with her. Or as he likes to think of it, right at home!

Cole Treadway was forty-two years old and for the past two years he had served as chief investigator in the Corporate Security Department of the Co- lonial Bank Group of Alabama1. Prior to coming to Colonial he had spent ten years as a special agent in the Naval Criminal Investigative Service--NCIS-- and before that seven years as a naval officer. When he had applied for the job at the bank the head of corporate security was very impressed with every- thing he saw in Cole Treadway and did everything he could to make sure that the former Navy man became a member of the Colonial team, which he did.

However, today that same head of corporate security was not so happy to have Mr. Treadway on his staff.

Due to recent problems in the banking industry, all financial institu- tions had begun to take a hard look at themselves in an attempt to make sure their houses were in order before some outside entity did it for them, namely federal banking regulators. And to this end, for about the last year Colonial Bank's internal auditors had been hard at work looking into all of the divi- sions in an attempt to discover if there were any unaccounted for funds or any other irregularities within their operations. And for an uncomfortably long period of time the auditors had concentrated on the Corporate Security De- partment, which greatly annoyed the senior Executive VP in charge. Never- theless, Marc Guyerson had nothing to hide personally and if there were something wrong in his department then he wanted to know about it. Or at least he had thought he did.

A few days ago the chief auditor brought him proof undeniable that at least seventy-eight thousand dollars had been embezzled from departmen- tal funds in various amounts over the past eight months; and that the skills

required to pull off such a feat virtually undetected were held by a scant few. Included in that number was the department's chief investigator, Cole Tread- way. And Treadway was the only suspect that the auditors could not clear. This greatly distressed Guyerson because he had become quite fond of Treadway, really liked the man, but the evidence against him was absolutely convincing.

And as Guyerson began to consider that evidence other things started coming to his mind. In particular the fact that over the past few months Treadway seemed to be letting his personal appearance slide. His suits were not as neat as they had once been, a couple of times he even came to work unshaven, and on at least one occasion Guyerson could have sworn he smelled alcohol on the man's breath early in the morning.

It was no secret that Cole Treadway was having marital problems; his wife had moved out a year earlier and had taken their two kids with her. They weren't divorced yet but the situation appeared to be heading in that direction. Even so, his personal situation did not appear to be affecting his work as far as Guyerson could tell. All tasks assigned to the Investigations Branch were handled promptly and thoroughly and thus far there had been no errors. However, when considered through the prism of hindsight, this was probably due more to the fact that there were several very highly quali- fied people in that branch besides Treadway, in particular his deputy, a for- mer Birmingham Police detective with twenty years investigative experience.

Guyerson had gone over the evidence provided by the auditors time and time again but could find fault nowhere, and in the end he had to admit what he already knew to be the truth. Cole Treadway had been stealing from the bank, and as much as Marc Guyerson personally liked the man, he had a duty to perform. A very unpleasant, but extremely necessary one.

First there was a quick consultation with the bank group's CEO and a few other key members of the bank's executive staff, all of them agreeing on what should be done. What had to be done.

An hour after that meeting I received a telephone call in Birmingham from Marc requesting that I come down to Montgomery to Colonial head- quarters the next day--today.

I was glad to get the call because for the past few months work had been slow. That's how it was in the private (freelance) security business.

Sometimes you had more work than you could handle and other times practi- cally none. It was already the third week of May and this was my first job for the month. Luckily I'm good at managing my money--and am a thrifty soul. I know how to make ends meet with a minimum of sacrifice.

Still, when Marc called I was relieved. Colonial was always a good paying client, considering they were the second largest bank group in the state. I've done lots of jobs for them over the years and more than once Marc has tried to get me to come onboard full-time, but I always refuse. Maybe I should reconsider that if things don't pick up on the freelance side. I know of at least one job in corporate security that will be open very soon.

Due to the sensitive nature of the situation with Cole Treadway, Marc decided to bring in outside security to handle it--me. He felt it was best not to ask someone who knew and worked with Treadway to be there while he was being fired. I thought that was best too; and it gave me a paying gig.

So here I was on a bright and beautiful Friday in late May standing in the corner of Marc's top floor office watching as Marc and Cole Treadway sat facing each other across the large teak desk in the middle of the room. Marc wearing a charcoal gray suit with red striped tie and heavily starched white shirt, and Treadway in a navy blue suit and light blue shirt, minus tie. He was unshaven and his suit looked like it hadn't been pressed in a month. Kind of hard to believe this guy was a former naval officer and NCIS agent.

I myself used to be an Air Force officer and spent eight years in OSI--Office of Special Investigations. I guess I was taking Treadway's ap- pearance and demeanor as a personal affront to my professional sensibilities. While it was true that I wasn't the most fashionable of individuals, I still took pride in my appearance. My khaki slacks were pressed, as were the dark blue polo and matching blazer that I had on. I was also cleanly shaven, face and head. Treadway probably hadn't shaved in three or four days, and his thick, prematurely graying hair was unruly, as if he'd simply run his fingers through it instead of a comb this morning.

He sat back in the chair looking at Marc Guyerson through heavily hooded eyes--bloodshot eyes.

This man was a mess. And I don't really think he had any pride left in him to give a damn about anything. 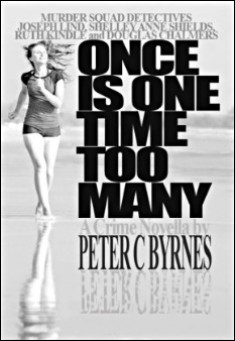