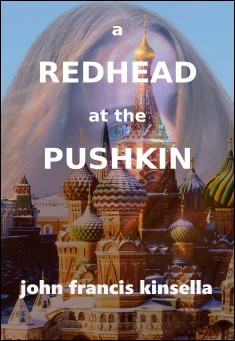 John Francis, a reputed though no longer very young Irish professor of economics, acting as an advisor to a City of London bank, meets a much younger woman in Moscow. Ekaterina Tumanova, an expert in contemporary art at an internationally respected auction house in Moscow, lives with Alena, her six-year-old daughter. There is an instant attraction, but the problem is how to reconcile two very different lives, he from a wealthy upper class Dublin background, and she trying to rebuild her life after the death of her husband, killed by a roadside bomb in Chechnya.

Against the background of Vladimir Putin’s Russia and a world of City bankers and oligarchs they try to make a new life together.

This is my story. Me, John Francis. I’m not the Pope, though if you believe the media some people might think I am. Francis is my family name. I’m not as young as I was, but in good shape, very good shape, and have reason to believe I still have a long life ahead of me. My father passed away at ninety eight and his father at ninety four, so I have every intention of getting the best out of the years ahead of me.

The reason? Well as the French say Cherchez la femme!

Ekaterina, but I’ll come to that later.

But first I’ll tell you about myself.

I’m a Professor Emeritus at Trinity College in Dublin, where I held the chair in economics for a good many years. So naturally I lectured on economics and the history of economics. I’m an academic and I live in an ivory tower. At least I used to.

For many years I’ve taught and written books on those subjects. Serious books, and also those that appeal to the public at large. Perhaps readers like you. The kind of people interested in what makes the world move. My books provide me with a steady flow of royalties and have earned me a place on the international conference circuit.

I am also head of a think tank and from time to time write for the financial press.

As a consequence of this background or life, call it what you will, I will deviate from time to time in my story to comment on the events around us, les maux du monde, and its leaders, and many other things. You can of course skip these monologues, but perhaps it’s worth spending a moment to pause and consider my observations and comments on events that may change your world.

From what I’ve said here you have guessed I have the means to chose what I want to do in life. Though between you and me my aforementioned activities are extras. Why? Because I was born with a silver spoon in my mouth, as they say.

An economic rule, one commonly known to even the inerudite, is money breeds money, and in my case it’s been true.

About ten years ago I was introduced to the banker husband of Alice Fitzwilliams—one of my friends from the Irish horse breeding and racing world. It seems he was impressed by my academic pedigree, not only in economics but also my knowledge of modern Russian history.
Well, without going into detail, when the financial crisis of 2007-2008 broke, Michael Fitzwilliams asked me to head a think tank to advise his bank. The idea was to analyse world events, breaking crises, and anticipate the effects on markets. Model the effects so as to minimise the consequences and if possible profit from changing situations.

It was the start of my rise as the eminence grise, if you like, of the City bankers, Michael Fitzwilliams and Pat Kennedy, and confident of the powerful Russian oligarch, Sergei Tarasov, their partner.

Being an academic has many advantages, it offers great freedom, respect and—perpetual youth. Yes, perpetual youth, it comes from being surrounded by young people with young ideas and forever optimist. Young people who seem to appreciate the knowledge, experience, I can hopefully impart to them and who enjoy the tales I spin.