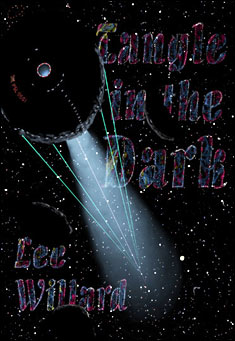 Tangle in the Dark
By Lee Willard

Their mission compromised by a crewman's hack, the Angel seedship Gordon's Lamp descends back into the sol system to find their home ravished by war, specifically a doomsday device in deep space. While being diverted to find that device, an enemy ship approaches, an enemy agent boards and their systems administrator disappears. Was it because of the discoveries they were making in the dark matter, or was it a new hack? And was their hacker the only one who could get their systems administrator back?

From this side the inter-universe portal looked like there was just a little cabana of weathered plank out here on these miles of deserted, palm-lined, soft-sand beach. That cabana went thru to both their homes, or anywhere else they cared to go, as long as Ava was driving. By himself he could only get to that stone door on the south path of Yoonbarla Vale. Of course she could turn up the magic level of her universe and make teleportation available to anywhere in her universe and that of any friends who were authorized an equivalent or greater magic level setting in their universes. She hadn’t altered most of the data the expedition collected while they were at 61 Cygni, so she was under no punishment regime. In fact she was a direct report to the captain and the Systems Administrator of the whole expedition. “How long do you think you have?” Alan asked as they walked the few steps to the beach.

“A couple hours,” she said, “No need to rush, but here we can be nude.” As she said that, she used a one-sided screen to remove their clothing from the rendering input to the sensory buses, and it vanished.

“As it was in my world,” Alan still retained the privilege of nudity in his universe, a modicum of privacy from the censors of the church. Though in his universe to get nude one had to physically remove one's clothing by hand as a mortal would, or remove each other’s. Ava did have the power to make their clothing vanish in his universe also, but would not reveal that to the crew. Alan knew that because he also had some knowledge of the underpinnings of their universes.

“Why don’t we go there?” she asked. She set the background scene to someplace in his universe for a few seconds. It is really different details in the trees, styles in the architecture, a different color to the sunlight. It was somewhere in his universe, which really consisted of a model of just that one planet. The spot she picked was a wilderness, like that at her beach, a river instead of a lagoon, with a very red sun, but then it all dropped back to her world after three seconds.

“Your beaches are as free of biting insects as mine,” he said, “so it doesn’t really matter. It’s each other that matters, not the scenes we project around us.”

With an arch of an eyebrow and a single finger on an invisible keyboard, she toggled scene generators back to his world for a few more three-quarter-second flashes. He could see a nude couple strolling toward them on the beach by the second flash, but after that she left the universe she rendered alone and said, “That is what is essential about any universe, without other souls, it is essentially an animated painting.”

They had walked to the water by now, stood together in the warm spume. He caressed her body, but he could tell she was tense and distracted. He plied her back and shoulders for the time being. He could ask what was bothering her, but she would get to it anyway.

The Musketeers of Haven: A Sci Fi Story

by M. S. Lawson Earth's one and only off-world settlement, dedicated to non-violence, equality, toleration, balanced development, an......

by Ryan Somma What is AI? What is Hacking? What is this story about? Excerpt: Flatline swept across the world in a ferocious whi......