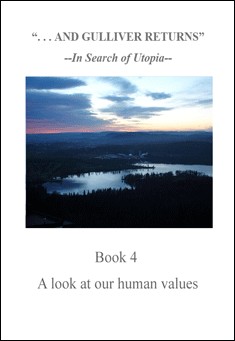 Book 4: A Look at Human Values.

Commander Gulliver meets with Professor Wang from Kino University where they discuss the foundations of our value thinking. Our non-provable basic assumptions as well as the sources of evidence that we might use in making our value opinions. They discuss the pros and cons of many value questions, including: abortion, illegal immigration, euthanasia, gay marriage and others.

“Our beliefs guide us.  I believe I will get my paycheck on Friday. I believe that my daughter will come home safely from her date. I believe I will go to heaven. These are commonly acknowledged assumptions. But there are other assumptions that we generally don’t even question the foundations of our thinking.  They are absolutely basic to our thinking and our behavior. Philosophers generally realize that they have such assumptions. They call them metaphysics--meaning beyond the physical world.

“Certainly not all philosophers agree. Plato saw the basis, the primary starting point, as ‘idea’—a world of concepts of perfection. But Karl Marx saw it as matter--the physical world. Plato, as do the great religious teachers, saw idea as coming first. Those religious sages would see the most fundamental idea as the spirit of God. Then God created matter. Marx would see the physical world as the fundamental starting point. As matter evolved into animal life, then human life, ideas evolved. So Marx had a diametrically opposite idea than that of the idealists.  Then, philosophically speaking, along came Descartes who said that both mind and matter are equally important. So the greatest minds of our civilization cannot agree on a starting point for our thinking.

“Most people in the world believe in a religion that they sincerely think is true. The Hindus believe that God is the totality of the universe. This is called pantheism, meaning that ‘all is god.’ Jews, Christians, Muslims, Bahais and Parsis or Zoroastrians believe in a single God. This is called monotheism. The purist Buddhists would not believe in a special god, but some Buddhist sects do and some, such as ‘Pure Land’ Buddhism believe in a hereafter like the monotheistic religions. While each may believe deeply in his or her God, and may even be quite willing to die for that belief, it cannot be proven. If any of these beliefs could be proven we would all have the same beliefs.

“Every religion has its scriptures or traditions that describe its god or gods and the morality that their supreme being requires. The scriptures and traditions cannot be proven or all of us would believe in all of them.

by Jennifer Gabrys A study of the material life of information and its devices; of electronic waste in its physical and electronic incarnat......