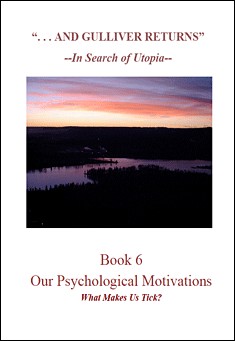 With a psychologist from the university they discuss psychological motivations such as sex and power--and more. With the combination of values and psychological needs and drives we have a good idea of why people behave as they do, and perhaps how to manipulate their behavior. Such understandings might make it more possible to clarify to the populace the dire straits of their planet and its various societies.

“Attacking reality can include such normal behaviors as laughing, singing, nail biting, thinking, working, playing, dancing, or swimming. Some of these are constructive activities, some are meaningless. Being overly aggressive in the use of a motor vehicle, fighting, beating a child, raping, robbing, or murdering are signs of the ‘fight’ syndrome done to a harmful degree.

“Traditionally boys and men have been more overtly violent in their attacks on reality. They have fought, stolen, and killed. Other men were not as violent in their harmful attacks on reality. They might have become bad check passers, con men, or exhibitionists. When women have used attack as an abnormal means of adjustment they have usually been non-violent in their attacks on reality. They might have shop lifted, become sexually promiscuous, or resorted to prostitution, but they seldom became physically violent. Recently, however, it has become more common for women to involve themselves in physically violent activities—bomb making, gang fights, kidnapping, robbery, spousal beatings, and murder. During the last ten years in your country the rate of arrests for violent crimes has risen twice as fast for women as for men.


“There is very strong evidence that the violence shown in movies and on television has given us permission to be violent.(15) Not only have the media given permission but they have shown us how to become ever more violent. Some years ago after a movie depicted some boys pouring gasoline over an old man and burning him, the same scene was played in real life, once with another old man being burned to death and a second with a social worker being set afire. Other violent scenes in the media have been copied by maladjusted people soon after they saw the action on television.

“On the other hand a sensitive portrayal of a violent act may make thinking people reevaluate their ideas and behavior. In a large study in which date rape was portrayed in a movie, many of the subjects in every age group changed their view of whom caused the aggressive act. Most blamed the man, older women who had earlier thought that it was the woman’s fault often changed their minds, but older men often reacted against the woman in the film.(16)  So the media can be used to increase or reduce violence—but the reality is that violence sells. Consequently, while such violence has anti-social outcomes, the belief of many that ‘freedom of speech’ includes saying and showing nearly anything will undoubtedly continue to give maladjusted people more methods of gratifying themselves by conquering others through violence and other means of attack. This is increasingly finding its way into family relationships as spousal and child beating.

Meat Atlas - Facts and Figures about the Animals We Eat

by Heinrich Böll Foundation and Friends of the Earth Europe The report presents a global perspective on the impacts of industrial meat and dairy production, and illustrates its inc......