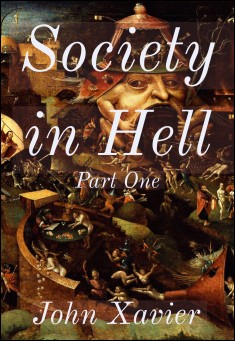 Hell, the place of eternal damnation. Not that different from Earth really. And for the daemons who live there, existence is largely a mundane affair; horror and atrocity being just the staples of ordinary routine. For one Asmodeus Cambioni however, his bland corporate servitude as a third-class torturer is about to be disrupted when he accidentally stumbles into events threatening to erode the very foundations of evil itself. A fantastical black comedy full of cheerfully grotesque episodes, Society in Hell is a vivid depiction of the ultimate dystopia.

He liked torture as much as the next daemon. Well, almost. He did find the screaming rather irritating. Most daemons thought this was one of the best parts but he was odd that way. He didn’t care for pleading either. Interfered with his concentration. He preferred a nice thoughtful quiet. The solution though was easy enough – he gagged his assignments. And if he didn’t have any rope handy he could always pull a few feet of intestine out of them and use that. He was wonderfully ingenious when it came to those sorts of things.

Asmodeus Lucifer Cambioni was a torturer by profession. Yes, his middle name was really Lucifer, but in Hell that’s like having the name Alexander or David. Daemon spawn are named after famous individuals all the time, and for the same reasons.  Mr.  Cambioni  furthermore  went  by  the  less  formal  and  magisterial sounding Asmoe in all aspects of his daily life – except when he was paying his taxes. In Hell naturally the taxes are rather high but payment tends to be prompt. This is ensured by a very sensible incentivization program – individuals who don’t pay in a timely manner are punished with unspeakable torments. Asmoe Cambioni in fact was now often the one devising and implementing said torments; a civil service he took great pride in.  He wasn’t a government employee though. Rather, Mr. Cambioni  was  a  torturer  third-class  who  worked  for  Tsuji  Giri  Enterprises; a subsidiary of Omnicide.  It just so happened that they’d recently begun taking a lot of  public contracts  and  that’s  why  Asmoe  suddenly  found  himself  inflicting meritorious cruelties on tax delinquents and litterers and serial jaywalkers instead of on the underperforming data-entry clerks and incompetent managerial staff who were typically assigned to him by his corporate clientele. Not that Asmoe had any complaints about this. While daemons came in even greater shapes and sizes than human beings, still they all suffered more or less alike. Bodily speaking that is. There  were  of  course  noticeable  mental  differences  but  these  only  became relevant with respect to psychiatric tortures, and Asmoe wasn’t authorized for that. A daemon had to have a doctorate in agonology before they could apply for the certification necessary to engage in the more sophisticated science of mentally inflicted distress. The danger of accidentally cultivating a lasting hope or resilience in the will of one’s assignments was simply too enormous for daemons without adequate training. In any case, Asmoe didn’t mess around with that sort of stuff. Nope, his business was just good old-fashioned physical excruciation.

Before going further into the remarkable events that were about to unfold for Asmoe Cambioni, a few things will first  have to be explained about Hell; geographical and economic details mainly, without which much of the story won’t make much sense. Hell, as most people when they arrive there are surprised to find, is nearly identical to Earth in terms of terrain. This is because Hell is actually a parallel Earth simultaneously existing in another dimension. There are notable differences admittedly. In Hell there’s no vegetation. No trees, no grass, no flowers. Nothing. There’s no rain either. There is water I guess but you wouldn’t want to drink it. Imagine the most repulsive liquid you can conceive of and you’ll probably come up with something close to what passes for water in Hell. About a sixth of Earth’s ocean mass remains there – a dark briny sludge that’s so loaded with corrosive pollutants it’s regularly used for industrial disposal. If that wasn’t bad enough, in Hell the sun has turned into a massive red giant large enough to swallow Mercury. Because of this, terrible solar storms frequently ravage Hell and bring suffering to those who dwell there. But still damnation goes on and this is where humans come into the picture. You see, if you die on Earth and you don’t satisfy whatever mysterious criterion the saints have for admission into Heaven – and as yet no one’s figured it out exactly – then you materialize in Hell at the same coordinates. For example, if you die in Los Angeles you’d reappear in Los Angeles. As unfortunate as that may be.

Regarding infrastructure and artificial things in general, these are all very different, but in terms of geography, Hell exists at a level of reality which in most ways conforms to Earth – the shapes and locations of its continents are nearly identical, likewise its mountain ranges and other aspects of its landmasses. It’s a world that shadows Earth with respect to its more robust natural features but the correspondence ends there. For example, the architecture in Hell is uniquely its own and the layout of its cities and towns aren’t constrained by Earthly principles. Daemons  are  nevertheless  concentrated  in  those  areas  which  overlap  major population centers on Earth for the simple fact that these are the places where most humans die. You see, humans provide the basis for daemonic society. Humans are far and away the preeminent commodity acquired and exchanged by daemons, for two reasons. The second most important of these reasons is that humans are incredibly versatile slaves. They can do nearly everything that daemons can do and unlike  the  subhuman  classes,  imps  and  goblins  and  what  not,  they  aren’t irredeemably stupid and unreliable. The most important reason though, and the much more important reason, is that humans are delicious.

by Gary Stringer An Immortal girl has desperate and dangerous plan to save her world through Time magic and begins to explain her actions......