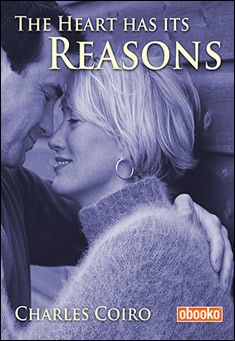 The Heart Has Its Reasons
By Charles Coiro

A studious, conservative young man, just starting to assume responsibilities with his firm and his equally conservative live-in room-mate lead a quiet, uneventful life until the young man receives letter from a South American lawyer informing him that he has inherited a vast amount of property and buildings in South America. After questioning his parents, he learns that his uncle, his father's brother has been estranged from his father.

The young man's mother encourages him to go to find out the details of the bequest and when he balks at having to go alone, it is suggested that his sister accompany him to lend support after his girlfriend urges him to ignore the letter and continue developing his life as they are presently living it.

Complications arise between the young man and his sister, which in turn leads to an extraordinary decision by the young man.

Jordon Marsh was part of a family that consisted of his father, Jonah, his mother Rona and his sister Nora. Nora was three years older than Jordon and was his big sister when he got involved with any of his classmates in fights or arguments. In the same way, she was the intermediary whenever their mother criticized Jordon for his dirty shirt, his torn trousers or his scuffed shoes. “He’s a young boy and his playmates are always kicking, punching or shoving each other; it’s what small boys do to try to achieve dominance. You might as well blame Nature. It is a way of life that can’t be changed.”

Nora and her mother were always at odds with each other and as is often the way, both were trying to exert their feminine dominance over each other. Mercifully, Jonah, the father would bury himself in his newspapers to escape the daily bickering between his wife and his daughter. When Nora turned 17, her mother was forever asking her why she didn’t go out with boys. Nora had been seeing a young man but things changed when the young man came to the house to pick up Nora. He was admitted to the house and the normal introductions were made. No sooner did they sit down when Rona asked innocently, “Did you go to the University? Did you graduate with good marks; where are you working now; are the salaries good, and finally, how much do they pay you each week?”

No young boy on a date is prepared for such a grilling and Nora was told that “if you wish to continue seeing me, she would have to meet him someplace rather than picking her up at her home. This is just a date to get to know each other, your mother is too inquisitive and I feel uncomfortable.”

Thereafter, when Nora made a date, she asked her date to meet her at the local ice cream parlor or wherever. It was not too different with Nora’s girlfriends. Her mother Rona would greet the girl and then ask, “Don’t you have some nice boys you can introduce to Nora? Hardly anybody comes to take her out.” Red faced and annoyed, she even denied her girlfriends admittance to her house so she appeared to her mother as the daughter without any friends. “How was she going to get married and have a family if she doesn’t see anybody Rona thought.”

Nora was a bright girl but not overly ambitious. She had been given lessons playing the piano and while she was quite good, she did not have the talent to be anything more than performer in a large orchestra. Her father Jonah was no music critic but he offered to have her continue her lessons. Nora, while enjoying the instrument was unwilling to put in the 6 or 7 daily hours of practice. When it came time to choose a course of study, she selected literature with an emphasis on writing. It was the one thing she could do without engaging other people. Nora was not averse to being with people but she felt that most of the time was spent in discussions that to her were meaningless. Who cared about what so and so thought or did. In a way, she said, it was like the graffiti left by travelers to say, “I was here or I am here”, perhaps even a little like the “Kilroy Was Here” drawing that the WW2 soldiers posted on every wall, monument or surface and like Facebook where people burp their single sentiments into a void more vast than the Universe. It made no difference what some small voice said; it mattered not at all. Nothing seemed to move Nora in an exciting way and she accepted it as “the way I am”. She was a rather attractive looking female but her attitude and disinterestedness left her with few choices as far as men went. Her relations with men were also lukewarm. When she did agree to have sex, she felt that her partner only took and never gave and as a result, she went through the motions without really giving or being moved or excited. Even this she did not mind except for the admonitions that were directed at her by her mother to find a man and get married. It was there that she rebelled. “What right has my mother to criticize or try to guide me after her own life was nothing more than mediocre. I suppose I love both my parents in their own way but I am me and I must have a chance and make a choice and not be interfered with or advised by what others think. If it takes me a few years or even if it takes many years, I want it to be my way and I will suffer the consequences and not put the blame on anyone else. And, as far as men are concerned, it goes the same. I am not going to marry if I feel the man wants his way and does not give my feelings any consideration.