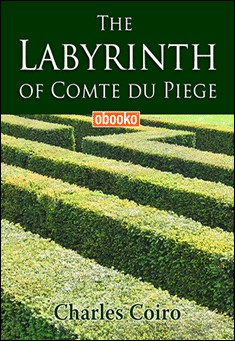 The Labyrinth of Comte du Piege
By Charles Coiro

A young, intelligent and sensitive young man inherits his father's title in France during the early 1800's. With a title and great wealth, his mother seeks a suitable young woman to be his bride; a woman who is equally wealthy and titled. A young woman of great beauty is chosen for him whose family agree to the match. While the young man is a serious, refined gentle man whose interests are in botany, the young woman has different ideas in which she wants to be socially prominent and not confined to plants and flowers.

Being a sensual young woman, she is attracted to a young boy, Zou Zou who works in their stable. He is wild and undisciplined, which makes him even more attractive to the girl. Their romance leads to her becoming pregnant before she marries the young Comte and the wedding is called off. The young Duquesa's mother dies and she is left with great wealth and property. She has the young stable boy move in with her and soon, because of his dominance over the young Duquesa, he carelessly gambles and spends the young girl's money until there is very little left of her fortune. Their young son, with the stable boy's background as a father, makes him unsuitable for any wealthy family as a son in law.

Zou Zou, always scheming talks the young Duquesa to talk to the Comte, the man she already jilted and cuckolded to have the Comte recommend him for a lucrative position. The Comte agrees to sponsor him but first, the young man must live with him so that the Comte can see if the young man has learned discipline and good values before recommending him for a position.

It has been 17 years since the breakup of the Comte and the now Duquesa. The Comte has been embittered for all these years and he has retired to his estate seeking only revenge. To protect himself from anybody, he has planted an enormous labyrinth to discourage anyone from visiting and has let it be known that in the center of the labyrinth, a great amount of money is buried. Like a spider setting a trap, the Comte hopes to ensnare Zou Zou. The story continues as the trap is set.

For the past 4 years, Henri de Vorgez, Comte du Piege was living with his wife, Yvette the Comtesa and his only son Gilbert de Vorgez in London, England , the Comte was involved in the lucrative trade of French wines and French mustards. The Comte was from an old family that had served France in many of its wars and thus merited the appointments of vast estates and vineyards where he grew his grapes. The Comte was a thin but strong man who had spent most of his life when he was not conducting business in physically exhaustive sports such as mountain climbing and cave exploration. He enjoyed the differences of being in the vast openness of the mountains and the closed confinement of the tight passages of the caves. The contrast, he often said was akin to breathing, an opening of the senses and the exhaustive needs to keep his body trim and strong. The Comte was a rather short man which suited his sport preferences by not having too much of his body exposed to the cold on the mountaintops and also his small, thin form made it less difficult to twist through the narrow openings in the caves. The Comte enjoyed the company of his male friends and disdained the elegance of the soirees and other social events, which was however, so often a requirement when connections were needed to resolve some political and business problem that had emerged. His face retained the redness of his cold mountain climbing and the compression of his caving. A man of 47, with his hair tinged with grey, he wore his clothing elegantly and always in fashion. He was the envy of many men who saw his outdoor activities as daring and fearless. But Fate, like always would be the determining factor.

In 1817, in an angry exchange between Louis XVII and George IV led to the Franco-British war. England invaded France and occupied northern and southern France- Paris fell to the British. The French and on July 14, Les Justes (The Righteous) bombed the Governor’s house in Paris and the fighting between the two nations from 1818 to 1824. In 1824, France is backed by the Spanish and French rebels; accomplish a coup and defeat the British. In September, a Peace treaty is signed between France and England , ending the war of 10 years. During the time when the British first attacked France, the Comte, was still conducting business. He immediately joined the French forces but was killed in action. His wife, the Comtesa and her son, Gilbert move back to France and settle in Alsace.

The Comte had had a vast estate and a Chateau, in Bois Pierret, near Mittlebergheim in the Bas Rhine Dept. of Alsace, some 30 Km. South of Strasbourg where he enjoyed the quiet and contemplative living in the woods and gardens. He had always asked that they bury him in Alsace and not in Paris. He used to say, Mittelbergheim was city enough and that Paris was too big for his taste. He had always felt that his last requirement of marrying his son would be the ultimate responsibility he would have so that he could enjoy his activities to the fullest. He was unable to fulfill his last responsibility of having his son marry.

After the Comtesa and Gilbert returned to their Chateau in Bois Peierret, the Comtesa felt that she should start considering a wife for her son. After meeting many of the families who wanted to marry into the Comte’s family, she chose Marie-Claire the only daughter of the extremely wealthy family of Le Duque and Duquesa de Marais. The Duque and the Duquesa were very social and were interested in raising their status in the nobility, she and her husband le Duque readily agreed to a union of their daughter Marie –Claire with Gilbert. Not only would it be a plum socially but there was also a great deal of money. Marie-Claire had just turned 17 and her beauty was recognized by all. Only el Duque wondered how long it would take before she looked like her mother. He used to say about women, If they are ugly, you at least have that much less to worry about.

Gilbert was passionate for his future bride. It was difficult to imagine this pure, innocent, unspoiled beauty would be his one day. Gilbert had already determined how he would train her in her duties as a Comtesa but also, as his companion when they walked in the woods looking for odd species of plants and flowers for their greenhouse. Gilbert was an avid student of gardens and plants and it was his intention to write a comprehensive book on the species they had in their own woods. With a wife and companion, the times would be like holidays of discovery. After their tiring day, both could sit down and analyze and catalog their findings. To Gilbert, this would be an ideal life.