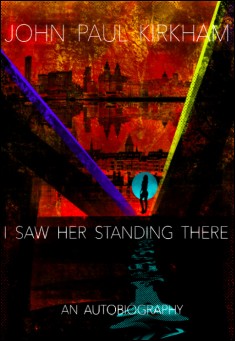 Free book: I Saw Her Standing There
By John Paul Kirkham

"I Saw Her Standing There" - is the long awaited autobiography. Loads of letters neatly boxed away in attics, cellars and garden sheds have now been opened for the first time since 1979 telling a tale of a very Bohemian love story when the world was younger and I fell in love with a girl from a distant shore. Two rebel hearts that collided in a european doorway forty years ago. The story of a time when it was still cool to be children of the revolution, a time when there was a whole lotta of love, other stuff and rock and roll.

Sometimes we put off or postpone projects and things for later or maybe we get a bit lazy. Well my excuse over the last four decades is that we moved flats and houses several times and each time a rather large packet of enveloped letters tucked away in a box found itself stashed away in a series of cellars, attics and garden sheds ……. until that is recently.

On a big tidy up and sort out during the 2020/21 Covid 19 pandemic and obeying (to a degree) the “stay at home” directive I opened the old Pickford’s Removals storage box and rescued a very large Liverpool University brown envelope stuffed with two bundles of rubber banded handwritten letters starting in the summer of 1979 between two ordinary people otherwise known as correspondence d’amour or love letters.

When looking back as though it were yesterday, is it a case of growing older and becoming more wiser or knowing what I know now would I have done anything different or taken another path. Not likely.

It was 1979 and forgetting the politics, protests and strikes the music was ace. The glam rocker Marc Bolan had kick started the decade with a white swan and ten years later a post punk Clash had regenerated a new breed of loud, exciting pure rock, whatever the genre the 1970s had it in overdrive, this was the time to be, no social media, mobile phones or texting just biro’s and fountain pens and a bit of Basildon Bond or a Woolies writing pad with the red spiral bound card cover, those really were the days!

Everybody has a year, a time or a place that means something. For me it was 1979, Led Zeppelin’s great epic last ever gig at Knebworth, I was there and … it was a time when the world was young and I fell in love … in love with a girl from a distant shore.

by Kevin Arthur O'Brien A rewarding, vibrant read of life, mysteries, miracles and history over the 80 years in New Zealand since the start of W......

by Michael Baxter My autobiography as a teacher who has worked all around New Zealand then in eight different countries. A sharing of life......