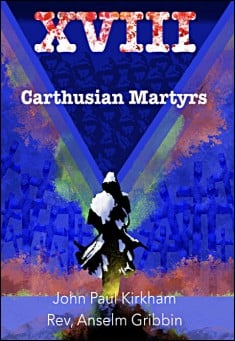 This book by the authors Fr. Anselm Gribbin and John Paul Kirkham tells the true story and the aftermath of the eighteen English Carthusian Martyrs during the Middle Ages. It also recalls the life of Saint Bruno and features a selection of Carthusian spirituality. The book cover features an original painting by the celebrated artist Jan Kalinski who after reading this story was inspired to paint the striking cover picture depicting the ascent to heaven of the English Carthusian Martyrs. Jan was solely guided by respect for a suffering that we cannot possibly imagine.

If a survey were to be conducted today in which people were asked about their knowledge of monastic life, they would probably say that the abbeys and monasteries in which nuns and monks live are to be found hidden away in the countryside in quiet places far away from modern cities. Although this is quite true in most cases, there are many religious who strive to live the monastic life in the heart of a city or other urban surroundings. Good examples would include the Tyburn Nuns in Marble Arch, London, the Carmelite Monastery, Allerton in the city of Liverpool or the gargantuan Monastery of The Holy Cross in Chicago. We might be inclined to think that “urban monasticism” is a purely modern invention, but would be wrong in doing so because many monasteries in medieval England were situated in or near cities and towns, both by accident and design. In the Middle Ages the City of London was certainly no stranger to the influence of monasticism. Not far from the Tower of London stood the Fourteenth-century Cistercian Abbey of Our Lady of Grace, known as “Eastminster”, while among the Benedictine houses in London was Westminster Abbey. If the position of a Cistercian abbey in London is extraordinary, it may come as a greater surprise to learn that the much stricter Carthusian Order, founded by St. Bruno in France in the late eleventh century, had established a house in London’s square mile.

A distinguished soldier, Sir Walter Manny, rented land owned by St. Bartholomew’s Hospital near present day Smithfield in order to provide a new cemetery for victims of the Black Death of 1348. He eventually bought the land and planned to establish a college of priests at the cemetery chapel so that Masses could be offered for the dead. This however did not happen, for Manny was later persuaded by the Bishop Michael Northburgh of London to found a house of Carthusian monks instead. This was done in 1371 and the necessary building work on the new monastery was completed over a period of forty years with the additional help and patronage of London’s more wealthy citizens.

The overall reputation that these Carthusians had for holiness and austerity was due to the good leadership and the order’s charism for strict observance of silence and solitude. It was to this saintly religious house that one Maurice Chauncy – whose accounts of the Carthusian martyrs we have drawn from - made his way in the early 1530’s. As we witness the unfolding of Chauncy’s life, against the backdrop of a difficult period in history, we will come to discover a story of courage and devotion to the Catholic Faith and to the enduring monastic way of life, so necessary in our own often turbulent times.

I think today we take for granted that our Faith is in many ways quite safe to practice especially here in the West, and we are familiar with great twentieth-century saints who have inspired us all, such as Saints Teresa of Calcutta and John Paul II. And many will also know the individual sacrifices made by Edith Stein and Maximillian Kolbe in the World War II concentration camps but it is also wise to travel back and refresh ourselves with the many holy people who will not be household names and for centuries have simply remained as martyrs, forgotten in a long lost far away time.

The modern-day authors Fr. Anselm Gribbin and John Paul Kirkham therefore strive to tell the hitherto and almost forgotten story of the Carthusian English Martyrs, not by hearsay or imagined hagiography, but by piecing together, after a great deal of complex and in-depth research, the genuine story as uniquely witnessed by Dom Maurice Chauncy, their companion and brother-monk in the Tudor times. Interspersed with Carthusian spirituality, much of the information which has been gathered, will shed a new light on to the Carthusians vividly remembering the life and death of an important group of English Martyrs, recalling their motto: “Stat Crux Dum Volvitur Orbis” – The Cross is Steady While the World is Turning.

I’m Dying to Get to Heaven: A Spiritual Quest

by Brian Thomas "I'm Dying to Get to Heaven" is a short yet powerful book that centers around the conflict of our two natu......

Getting Past Me and Being Closer to Thee: a Clear Path to a More Spiritual and Happier Life

by Brian Thomas The purpose of this book is to bring one person closer to God so they will have true joy and peace in their life. We can......