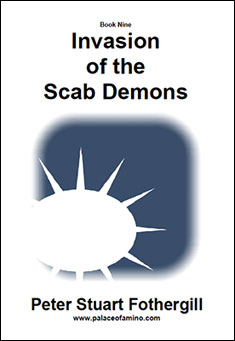 Invasion of the Scab Demons
By Peter Stuart Fothergill

2433 AD - An infection discovered deep within the core of a comet sets alarm bells ringing at the Palace of Amino. When the origin of the comet is discovered a terrifying plot is revealed. There is not much time.

“It is confirmed as a 17 metre wide hollow stone sphere encased in an irrevium-iron shell.  The stone sphere contains unidentifiable biological matter.”

Sadie Stick, a fourth-class bounty hunter of enticing curves and flexibility, looked at the two-hundred metre wide slab of ice outside the large oval viewport at the front of the bridge.  Its rugged surface glistened brightly in the pale yellow light of the nearby star.  She turned to her artificial companion, who was still gazing down at his sensor screens.  “The same as the other one?”

THROB turned his cylindrical head and responded.  “It is essentially the same in all but superficial respects.”

The bounty hunter looked down at her screens.  The second comet, just over a light-year away, was drifting on an almost a parallel course.  She shook her head.  “This is most odd.”  She pointed at her screen.  “And look, there’s evidence of a third one three light-years away.”  After a few seconds thought she pulled herself out of her command chair.  “We need to know what’s inside.  I’m going to take a look.”  She stared out of the viewport once more.  “Take the Retarded Monk Grinder round to the comet’s dark side and use a disruptor beam to melt me a hole down to that stone sphere.  I’ll be down in the port airlock.”
THROB nodded.  “As you wish.”

“And continue your scans.  I want to know where the comets originate and where they’re heading.”  Sadie Stick slapped her left buttock, turned, and then strode purposefully off the bridge.

The outer door of the Retarded Monk Grinder’s port airlock whirred and then slid open quickly.  Sadie Stick activated her environment suit’s floodlights illuminating the icy surface of the comet which was just a few metres away from the open door.  A hole, more than three metres across, sank deep into the comet’s interior.  She activated her communicator.  “THROB, I’m heading out.  Monitor me closely.”

The mechanoid responded dryly.  “As you wish.”

The bounty hunter stepped to the edge of the airlock and then pushed herself off.  Released from the pull of her ship’s artificial gravity, she drifted across the dark void and into the deep hole.  She activated her suit’s thrusters and accelerated forwards.

The hole, almost a hundred metres deep and drilled by her ship’s distruptor beam, was perfectly smooth and coloured turquoise in the light of her floodlights.  As Sadie Stick drifted deeper she noticed the ice beneath the surface glistened and flickered as her lights reflected off imperfections and bits of dust.  She found it eerily beautiful.

The end of the tunnel was in sight now.  The scorched surface of the irrevium-iron shell could be seen, and even some of the stone beneath.

From a holster on her suit’s thigh Sadie Stick drew her chunky-looking pistol and aimed towards the end of the tunnel.  Setting the weapon to ‘Constant Beam’ she fired.  An almost blinding orange beam cut into the metal and stone ahead showering the tunnel in spark and molten debris.  As she continued to drift closer and closer the bounty hunter slowly moved the intense beam from side to side. Within a minute a hole big enough for her to climb through had been cut.