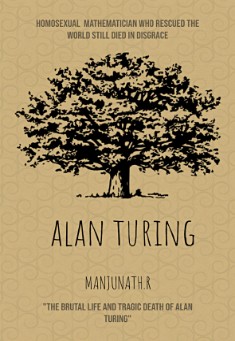 Alan Turing: Rescued the World but Still Died In Disgrace
By Manjunath.R

The Mathematician Who Rescued the World Still Died In Disgrace.

Alan Mathison Turing -- English mathematician, logician and philosopher who made important advancements in the field of computer theory and who contributed important logical analyses of computer processes. In an unfortunate end to his prolific career, Turing was arrested in 1952 after British authorities found out he was having a relationship with another man. Under British law, homosexuality was a crime, and it resulted in Turing losing his security clearance to continue his work at Bletchley Park. Rather than face a life in prison, Turing accepted treatment of regular estrogen injections, which were believed to neutralize libido. On 8 June 1954, Turing died of potassium cyanide poisoning while conducting electrolysis experiments. The cyanide was found on a half eaten apple beside him. An inquest concluded that it was self-administered but his mother always maintained that it was an accident. In 2013, a bill was passed offering statutory pardon to Turing for offences under section 11 of the Criminal Law Amendment Act 1885. In 2016, the law (known as Turing's law) was widened to retroactively pardon all men who were convicted under the historical legislation of gross indecency.

The Guide to Online Learning

by Bryan Walker The worldwide lockdown, in response to the global coronavirus pandemic, has resulted in children and adults spending lon......

by Manjunath.R Science is a systematic enterprise that builds and organizes knowledge in the form of testable explanations and predicti......