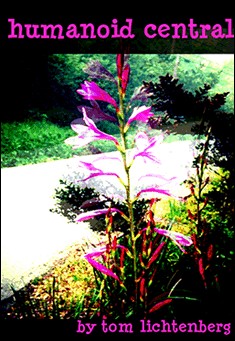 Way in the future, people and androids need to discover a wat to exist with each another, yet they're failing to, hopelessly. Bogged down by war and natural disasters, another generation needs to meet the challenge. A select group of Future Leaders is sent to a special institute, a kind of Blade Runner High School. Its up to these teens and young adults to figure out how to conquer their differences, to see past the extraordinary divide of their time, and introduce another period of peace and humanoid cooperation. Will they be able get along? In this absurdist tale, they're going to require all the luck they can come by.

Helena Vega had always, always wanted a daughter, and the early stages had been wonderful, but at the current stage, fifteen years old, Bysshe had developed so many strange preoccupations that her mother couldn’t help but wonder which of her own many mistakes were at fault. She was almost beginning to wish the family had never been selected for the Leadership Council, which meant Bysshe was enrolled in Humanoid Central, the new experimental high school where humans and android were supposed to be learning how to co-exist in mutual respect. It was said to be a great honor to be chosen as one of the Future Leaders of Today. Only a handful of families were singled out for that role and Helena still remembered how happy she and Juan Carlos Enrique had been the day they found out. A lot can change in a year.

Was it only a year since her daughter was struggling to escape from her stroller while Helena pushed it around downtown Hoyo, Alaska? It seemed like only last month that Bysshe was a little six year old girl, running around the playground with Robin and Lou, the twins who lived next door, pitching pennies and making dolls out of knee socks. It seemed like only last week that she was roaming the town with her new best friend, Aidan Alexa, collecting bottle caps and memorizing bus maps. Helena had snapshots of these visions in her mind, memories of a girl who was and was not the same as the one who lately came storming home, slamming doors and locking herself in her room.

Gone were the days when Bysshe would willingly tell her mother about her day. It had been their special ritual. The daughter, arriving home with her backpack full of books, dumping its contents out

on the kitchen table in search of that one ragged and smudged piece of paper containing homework due the next day. While she would sort through the piles her mother would be bringing a glass of warm milk and prodding, in her steady mom voice, “so, tell me about your day.”

Helena could mark on her calendar the transformation of those homecomings. The early-elementary- school Bysshe would begin with “Well, let me see” and with a serious look on her face put together a few sentences that would sum up her day quite nicely. The older-elementary Bysshe was already coming up with canned deliveries. “In the morning, and then at recess, and then at lunch, and on the way home,” filling in the spaces between those scheduled intervals with obligatory, if ad hoc, remarks. By middle school age, Bysshe had narrowed it down to a handful of memorized reports, consisting of what she considered to be suitable variations in order make it seem like she wasn’t merely going through the motions.

They were both going through motions by that time, however. Fifteen. Really? Fifteen already? It didn’t seem possible. And now Helena couldn’t even begin to request any listing of her daughter’s diurnal activities. Bysshe barely breezed through the hallway on her way up the stairs, and Helena would have to lie in wait if she wanted only to catch a glimpse of what particular shade of blue Bysshe had wrecked her pretty hair with, or to try and find out if her daughter had attempted to stick any more silvery piercings into the side of her head or wherever. She had already blown through her stock of parental and feminine advice, and the girl had no interest in whether her mother might think it appropriate for her to go out with her butt barely covered by fabric. This was the new Bysshe, the self-invented one, the one who had long ago shed all the best of her mother’s intentions.

She was not an ungrateful child, or even a really unpleasant one. She could be perfectly nice, if she wanted, and sometimes she did, but rarely at home. She was anxious, which might be the one word best to describe her. She’d always been ready to go, as if there weren’t enough ways to burn off the heat that continually boiled inside her. She ran. She ran miles and miles every day, but she wouldn’t have been

on a track team at school, if there was one. She only ran wild. Races and times and goals didn’t attract her attention. They weren’t the point. Anyone can “win” as long as they’re better than somebody else, and she never had any use for comparisons. She also liked riding her bike, especially up in the hills, where she pushed herself hard going up, and coasted, brakes on, coming down. It wasn’t about speed. It was all about fuel.

Behind His Mask: The First Spell Book

by Stephanie Van Orman Evander is a complete mystery to Sarah until she's given a spell book he authored. Pulled into the story, she plays......

by Eliza Witte This is a YA and Teen story about friendship, love but mostly about life. In between the harm of drugs, the revitalizing......