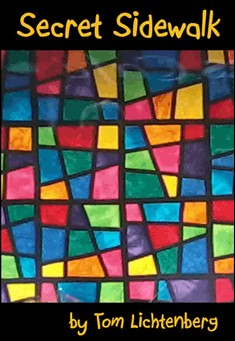 Beauregaard Sweet became invisible, but his troubles began when he suddenly reappeared. Now everybody wants something from him. Manny the mechanic wants his wife. Sharad LeMaster wants his secret. Emma Biggs wants another shot at the TV news, the leaders of the Four Tribes want to send him back to wherever it was he'd gone, and all he wants to do is eat some donuts and watch reality TV.

When Marcus was eleven, and his little brother Ben was only six, they lived on a boat in the harbor with their mother, a hard- working grocery store clerk named Kristen Holmes. Sometimes Ben had trouble sleeping at night, and he would climb to the upper bunk and jab his brother in the ribs until he woke him up. Marcus would open one eye, and then the other, and eventually say, "What?"

"I can't sleep", Ben would reply, and Marcus knew what that meant. He would sigh and say "OK", and then they'd both climb down, slip on their shoes, sneak up deck very quietly so as not to wake their mother, leap onto the dock and head out to the secret sidewalk which was right across the street behind the parking lot.

Usually it was a hot summer night when this happened, and no one else was around, just Marcus and Ben, some crickets and skunks, and sometimes a bulldog named Sparky who was supposed to be guarding the fleet, but most of the time did not.

The sidewalk was hidden between a wall and a hedge, and it basically went nowhere at all. It was lined with the backs of old buildings, which housed a variety of tenants; a body shop, a nightclub, a diner, a tattoo parlor, a newsstand, a mysterious dark office and a beauty salon. It started on Riverside Drive and extended one block, then it came to an end at Battery. The hedge kept it hidden from view from the lot.

This sidewalk turned into a city.

They reached the corner at Riverside and stood, face to face, on the very first square of the sidewalk. The night should have been dark, but the reflected light of the downtown sky kept the stars at bay and the moon soft and pale.

"I'm thinking of a number", Marcus began, "between one and one hundred thirty seven", and Ben began to squint and squirm.

"Twenty!" he shouted and Marcus had to remind him to be quiet with a shake of his head and a finger to his lips.

Marcus smiled and said "How did you know?" as Ben shrugged and laughed without making any noise.

"Thirty two" Ben repeated, and began to walk off the steps. He knew from various experiments that there were exactly one hundred and thirty seven Marcus-steps from one end of the sidewalk to the other. With Ben trotting along beside him, Marcus marked off thirty two steps, and stopped at an oil spot rainbow on the path. Marcus nodded for a moment, and then began.

"The Dark Rider came through here not long ago", he said. "You can tell by the blackness of this spot". He knelt down and put his nose to the ground, waving at Ben to do the same. After they'd both sniffed around the area, Marcus asked Ben what he smelled.