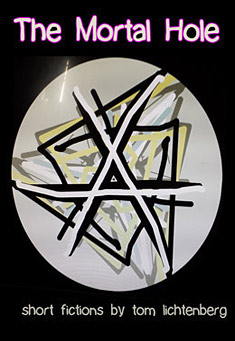 The Mortal Hole
By Tom Lichtenberg

A collection of short fiction stories, including the Sexy Teenage Vampires trilogy, The Man Who was also a Dragon, and several other entertaining stories.

I was at work one day when my wife called to tell me she was hearing some weird sounds coming from the kitchen. She said it was like a rustling noise, as if someone was crumpling up newspapers behind the sink. I said she should just ignore it, but she said “easy for you to say”. She was trying to get some work done and it was driving her crazy.

“Or rats,” I said to myself after pausing to think long enough not to say it out loud. There was no sense in making the situation any worse. I told her I’d look into it when I got home, but if she had some other suggestions she should go right ahead and do whatever she thought best.

“I don’t want to do anything,” she replied. “I guess I’ll just go into the office after all.”

That night when we got home we didn’t hear anything in the kitchen. I decided to inspect the perimeter of the house to see if there was any way any varmints could have gotten in, but I was already pretty sure of the answer. Our house was made of cinder block walls and a solid cement floor. There were no cracks that I could find, nothing to indicate there was any entry point for rats or mice or squirrels or anything like that. It could have been cockroaches, I thought, except that where we lived there were no cockroaches. Ants don’t typically make a lot of noise so I ruled them out as well.

“It was coming from behind the sink,” my wife reminded me, so we got out the flashlight and looked under there. It was possible. We had redone the kitchen at one point and put in new cabinets that were not flush against the concrete walls. If something had somehow found a way into the house, and then behind the cabinets, there was definitely a few inches of horizontal space behind the kitchen sink that could be inhabited. And there was a way in from the front, an electrical outlet that did not have a cover around it.

There were two questions now. One, how did it get there, and two, how to get it out, whatever it was. A trap didn’t make sense until we had a better idea of what the thing was - or things were, if there were more than one of them - and the same went for poison. I was all for poison, though. I could take the temporary stench of a decaying corpse of any kind as long as it meant an end to the problem. If there really was a problem. After all, I had never yet heard a thing, and didn’t hear the noises for a few days after that.

It wasn’t until the weekend, when I happened to be around at mid-morning when I did finally hear it. Like my wife had said, it sounded like something crumpling paper, or crackling those really tiny packing material things that go off like little fireworks when you crease them with your palm. I tiptoed into the kitchen as if I was afraid it would stop at my approach, but it didn’t. The noises continued. I could narrow it down, not to behind the kitchen sink, but over to the right a bit, behind the cabinet where we used to keep the cat food before we finally got rid of the damn cat.

It had to be rats. I don’t know why I came to that conclusion, but I had had some experience with rats in a previous lifetime, and I thought I could smell them now. I decided again not to tell my wife about this suspicion, but went down to the store and bought some poison. This poison came in pretty blue blocks that allegedly tasted like peanut butter. That ought to do the trick, I told myself, and rushed home to toss a couple of the blocks through the open electrical outlet. Then I stood back and waited, silently for a time, unti finally I heard some tiny creeping noises, as whatever it was seemed to scurry closer and closer to the poison. I imagined I could hear gnawing then, and chewing, and swallowing, and just as I was about to do a silent fist pump celebration, I heard a frantic squeaking come from behind the sink, and then a banging sound like a little tiny head being bashed against a wall. I stopped in mid-pump and held my breath in anticipation of more victimly outbursts, but instead there was silence, Just like that.