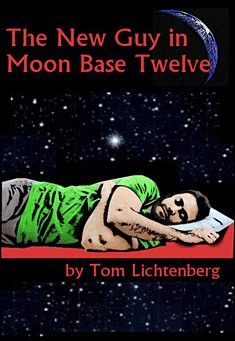 The New Guy In Moon Base Twelve
By Tom Lichtenberg

They weren't exactly the crew the President had in mind when he announced his plan to build a permanent base on the moon so the Chinese wouldn't do it first, but there they were, a boring collection of peaceful, happy settlers who couldn't even get a decent reality TV show rating. Life was perfectly dull until the new guy arrived. Now if they could only find out who he was and where he'd come from.

Since there were to be relatively few persons on the base, bisexuality would be a highly adaptive quality, ensuring the most possible partnerships among the population. Atheism was considered extremely desirable due to the tendency of religious persons to argue amongst themselves as to which of their fairy tales was the least incoherent, and which of their imaginary friends the least prickly. Also, the landscape of the moon was one of the most god-forsaken places in which it humans had ever attempted to live, and it would help to have no god to blame this forsakenness on. Socialist, even Communist, was highly regarded in a similar way because of the limited quantity of goods that would be distributed, and the lack of quality of same. People with a will and desire to share and share alike on principle would get along much better than those perpetually looking out for number one. Vegetarianism, the final consideration, was perhaps the most obvious. There was to be no meat on the moon, excluding cannibalism, of course. The settlers would be growing their own food hydroponically and developing additional nutrients chemically.