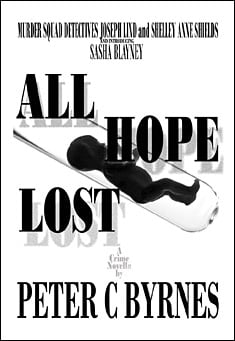 This is the 37th. Instalment on the Series detailing the Homicide Cases of Detectives Joseph Lind and his young partner, Shelley Anne Shields. They have been requested to mentor the up and coming young Detective Sasha Blayney for a short period of time until a suitable partner can be found for her as her previous partner has elected to resign from the Murder Squad for personal reasons.

Everyone lives with a certain amount of hope in their lives.

Hope for the future. Better weather. A more successful relationship. Better behaved kids. A better job or that long held wish for that promotion with better wages to boot. A future for their kids. Their team winning the FA Cup or the NSW Rugby League Grand Final. A Lottery win. Even a new car perhaps.

But what if we lose all hope?

Do we get on with our lives and fill that empty bucket with hope again?

Some can; some can't.

And when all hope is lost? What then?

He prided himself on his punctuality.

Some people would accuse him of OCD tendencies.

He felt that punctuality was a sign of politeness and a good upbringing. Something that he proudly would boast about. His family roots set in helping those less fortunate then himself. He was carrying on the tradition of his father and his Grandfather before him.

Six forty-five AM, he would step from his vehicle parked in the Reserve position on the third level of the underground parking area. He would enter the Lift which would quickly bring him to the Ground Floor and out onto the suburban street. He would then walk briskly the two blocks to the small corner Caf? where he would receive his double Java without having to wait. He would sit sipping on his first coffee of the day from between Seven O-five AM until seven-thirty, reading the morning paper that the Caf? provided.

At seven-thirty, his Secretary would stroll in to obtain her coffee.

So too, his Receptionist.

They would step from the corner Caf? together, waiting at the Pedestrian Lights to cross the busy street.

The Clinic was on the opposite corner.

The three would enter the Clinic and disarm the Alarm system. They would boot up the computers and settle into the comfortable chairs in the small Conference Room to discuss the business of the day.

At exactly eight-fifteen, the doors would be open and usually the first people to enter would be the remaining staff along with perhaps an early patient.

Doctor Harris-Cord would peruse his overnight e-mails and Patient Reports of to-day's bunch of patients.

At nine exactly, he would see his first patient which usually was appointed as the first visit at eight-thirty.

Even the first cab off the rank had to wait the prerequisite half hour out in the Waiting Room!

Many Patients questioned this arrangement, wondering why their appointment could not be made for nine instead of eight-thirty, to which the Doctor would reply, "What if I have no Reports or e-mails to read? A half hour of my valuable time would be wasted! Besides, with that extra half an hour, that is another paying Patient at $180 for the visit."

It had never happened where that half hour was not filled with the frenetic viewing of Reports and answering important e-mail queries, but that seemed to escape the mental prowess of the middle-aged man.

- - - -
On this particular morning, the whole minute by minute arrangement for the beginning of the day was thrown into utter chaos.

A traffic accident on the motorway delayed him by some minutes which meant that he alighted from his vehicle on the third level of the underground parking station at seven-oh-ten. Twenty-five minutes later then was his normal practise. This meant that his normal brisk walk of the two blocks to his little corner Caf? was done at a slow jog. Still, his coffee was hot but the delay would mean that he was unable to read the morning newspaper.

There wasn't much news this morning in any case, he reconciled with himself. He didn't feel like reading more about people blowing themselves up and perhaps countless others of the same religion. Seeking a faster way to heaven and a martyr's fame.

Another suicide attack in Israel.

Paris hit by another wave of bombings.

Another shooting spree in some State in the US... and a two second sound bite of a fire-bombing overnight of an IVF Clinic in Melbourne.

He had listened to the News on the car radio as he drove towards his Clinic, switching it off to scan through the messages on his iPhone that may have landed during the night before. These were relayed by blue-tooth through his radio by a metallic, bodiless voice.

A colleague in a most distraught voice had rung him, cutting across the radio News. Telling him in detail what he had just heard on the radio. He was concerned that there was a party hell bent on destroying as many IVF Clinics as possible...he smiled at this obvious paranoia, joking that conspiracy theories were thin on the ground. It just didn't happen in Australia, he cooed to his colleague.

An accident. Pure and simple. It happens.