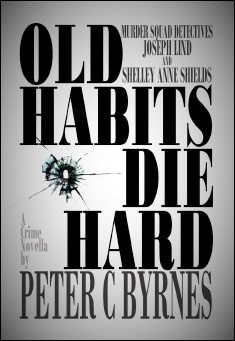 This is the 47th Novella in the continuing series detailing the career and life of Murder Squad Detective Joseph Lind and his long term professional partner, Detective Shelley Anne Shields.

Two separate cases of a 'Drive-by' Shooting homicide causes the death of a former young felon,Joshua Blackwood and two weeks later, the deaths of Bradley Hammond and Lee "Betty" Po, his live-in partner. While there appears to be no connection between the two homicide Cases, the Detectives are continually drawn back to two firms who may have been involved in drug distribution and selling in the past. The Courier Van Business employs almost exclusively, former Inmates of the State's Correctional facilities.

The Owner and Boss of the Firm is either touted as next in line for "Sainthood" or a person who could be corrupt, using young ex-criminals for nefarious purposes.

What is the connection between the two Cases and why is the Courier Business that had employed the young Blackwood as a driver, continually on the periphery of the investigation?

Can a criminal escape the life that was possibly inbred into him from an early age, refined further while mixing with hard-core felons while in Prison? Or do old habits die hard?

Would fellow felons permit a colleague to leave that life for an honest existence and would the Police, who see nothing but repeat offenders during their career, believe that an ex-Crim can choose and remain on an honest trajectory throughout their life, leaving that former life behind them?

Even for old, cynical Murder Detectives who have seen nothing but Criminals re-offending, old habits die hard.

In Fairfield and Canley Vale, neighbouring suburbs on the main south-western rail-line out of Sydney, there is one after the other. Both sides of many streets. A blight that sprawled across the near western suburbs in the Sixties and Seventies. Small Builders getting a foothold in the building boom. In the Property Development market. Several large Building Conglomerates that now dominated the Australian Unit Development market began their illustrious careers in this manner.

These little monstrosities either constructed of bland blond brick or wire-cut red brick, rising three floors above an open parking area as minimalist cubes or rectangular blocks. Either flat roofs or pitched, terracotta-tiled roofs that did not do much for the aesthetics of these complexes...or the neighbouring streetscape.

During one or two Christmas Holidays and yes, mid-year Holidays when I was sixteen or seventeen, I had laboured on a building site just like these ones once were. Many young kids did so to earn 'pocket money', University fees or money for Backpackers to continue their roam around Australia. The money earned enabled me to get a car when I turned eighteen. My Nanna had laid down the law that she could not afford to help in the purchase or the running of the car so it was left up to my devices. It was my responsibility.

Many a week-end that little faded red Mini sat forlornly in the driveway because I did not have the money to pay for petrol!

So low on money even purchasing fuel for a Mini that ran on the smell of an oily rag proved next to impossible!

A little red Mini that could have done with a cut and polish...or a new duco spray, if the truth be known! Oh! The memories! I often wondered how I survived in that car...and a Mini is not the greatest love-nest alternative at the one Drive-in Theatre still running in the western suburbs during the Eighties! The equivalent of having sex in a Telephone Booth with a chair provided by the thoughtful 'would-be' lover. Everything was against you achieving your goal. Too little room for arms, legs and bodies trying desperately to achieve a suitable position. Two heat-fuelled, sex-starved teenagers trying every combination to copulate comfortably, usually failing dismally!

I must admit that by the time I purchased the vehicle, the glamour and status of owning a little red Mini had worn off. More 'groovy' machines were making their mark on young people. I looked on as a poor 'throw-back' and chicks of that time not turned on by my little Mini as had been the case in the hey-day of the vehicle in the Sixties...and by then, even base model vehicles had 'layback' seats...or a decent back seat to migrate to comfortably!

But I digress...my mind flung back to those times as Shelley drove the Unmarked towards our new Case of Homicide through suburban streets that had a faint familiarity about them.

These ugly little Unit complexes the disease of the sixties and seventies where very little imagination was utilised to design these rectangular brick edifices. Three storeys high. Any higher and Building Regulations demanded that you included a Lift. An elevator to all floors, plus fire-rated access/escape stairs. That financial disadvantage too much to consider, with the return added outlay not commiserate with the asking price of each Unit.

Usually four or eight small two Bedroom Units to each floor. Two or more on either side of each stairwell landing was the standard design if the block of ground permitted such an arrangement. If not, then one Unit either side of this access stairwell landing was the norm. Open parking positions on the ground floor or perhaps individual garages with swing up garage doors in the classier suburbs. An excuse for a Balcony, one to each Unit. Small and narrow as though the Builder or Developer had originally intended to overlay the concrete floor with gold leaf, thus the reduced size, but opted out at the last minute when the cantilevered Balcony floors already formed up, and the concrete poured. Their life now one of a neat concrete finish, not even tiles to brighten up the floor area!

As I have stated, not much imagination or architectural input required in those days!

On the narrow, short Balcony you had enough space for a chair to sit on with your feet firmly positioned on the top railing of the open, wrought-iron balustrading. The narrowness forcing you to bend your knees almost to your chest! The only way to straighten your legs was to let them cantilever out over the top of the railing. Your calves resting uncomfortably on the top hand-railing.

The only time that you conversed with your fellow Unit neighbour was perhaps when you were both out on your Balcony having a smoke, a stubbie in hand. The entire neighbourhood aware of the conversation. The words echoing off the straight, bland brick sides of neighbouring Unit complexes that squeezed each other tightly as that is how close each neighbouring building was.

by Peter C Byrnes We all do it … that is kill time. In various guises and for different reasons we do it regularly throughout our l......

by Robert Burton Robinson Book 4 in the Greg Tenorly Mystery series. When Greg Tenorly gets an invitation to his dad's 75th birthday party,......