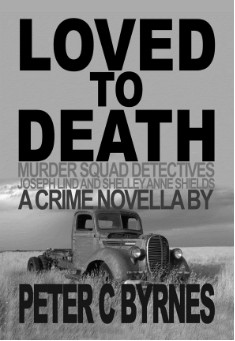 This is the 60th Story in the Detective Joseph Lind Novella series. We are sure you will join us in congratulating Peter for this amazing achievement!

For the last twenty-five years or so, persons can obtain the Carer’s Allowance if they are looking after a parent or relative who requires full time care due to their failing health. The Government introduced this Carer’s Pension encouraging people to care for their elderly parents. Even with the Respite Services available, this was considered cheaper than having these patients cared for in a Nursing Home, Retirement Establishment or Hospital where beds were at a premium and were predicted to worsen over the next thirty to fifty years.

The population, like those of many countries, is ageing which will place enormous pressures on the entire Aged Care Industry in future years.

In late 2019 there were several Cases of elderly Patient abuse caught on hidden cameras and a string of unexplained deaths in various Nursing Homes throughout the country.

As a consequence, in late 2019 the Federal Government initiated a federally funded Royal Commission into Aged Care with sweeping powers to investigate the workings, funding and employment across all aspects of the Aged Care Industry.

If these examples of abuse in recognised facilities for the Aged caused this initiation, then what is the true nature of the level of care for an elderly parent at home. If professional persons can be found to abuse elderly patients, what is going on behind the closed doors of countless homes across Australia?

Are we treating our elders satisfactorily or are we lacking professionalism and duty of care?

Are we lacking love and empathy towards those whom we should love and care for without question?

Are there those who volunteer for such duties merely to be given a pension for doing so? These people closing the door to their ailing parent in order to obtain not only the Carer’s Pension but also the Age Pension for their Patient from the Government?

Are there those who find the role extremely difficult and thus, the ageing patient does not receive the attention they deserve?

Are these people who are bedridden and who can no longer complain being treated with respect and love ... as they had shown care and love to their children as they grew ... are we expecting too much for those ill-equipped to accept the role?

“What’s it got to do with us, Boss? It appears to be a ‘Hit and Run’ that the local lads can deal with…”

“They were going to go down that track until they viewed several local CCTV footages and interviewed several witnesses. According to the Lead Sergeant on site, it was a targeted hit with the vehicle double parking up the side street for some time until the victim began to cross the road at a Pedestrian Crossing point. She stepped off the kerb with the green ‘Walk’ sign on. The guy accelerated as he came around the corner, went through the red lights to take out our victim…so that is why we have been called in…okay? Gather up your things and get out there, quick smart, eh?”

I nodded, walking back to my desk as I told Shelley to get her act into gear as we were out of there.

“Ruth Kindle is coming with us, Joe…”

“Yeah, sure…one too many for a crowd but what the heck.”

As I passed Hendo’s desk, I picked up the necessary paperwork and details, transferring the information into a new Case Folder on my iPad as we rode the Lift down to the sub-basement where our Unmarked was parked. Burwood wasn’t that far from our building at Parramatta and with lights flashing without the siren giving me industrial deafness, we made it in good time. Burwood Road cordoned off with the Belmore Street intersection the centre of all the carry-ons, giving the local Uniforms a major headache in directing the heavy traffic detouring around the area. Belmore Street as a cross-street to Burwood Road was also sealed off. Through traffic diverted via Railway Parade up and down Wentworth Avenue or Shaftsbury Road both running parallel to Burwood Road. Wentworth Road halfway between Strathfield and Burwood Train Stations.

Shells parked the vehicle close to the crime tape ‘barricade’ and we asked the young junior Constable who was in charge as we signed the Crime Scene Register who was the Scene ‘Lead’. The young woman pointed to a tall woman who had that look of authority.

“Glad youse could make it,” she replied after we did the usual handshaking ritual. “You sign in?” She asked as though we were wet behind the ears Probational Constables who still had to learn the ropes. Shelley must have seen the steam beginning to escape from my ears, as she stepped in to take control of the situation between me and the Crime Scene Lead.

“You seem to think this was a targeted attack, Sergeant?”

“Yes…at first we thought we had the usual ‘hit and run’ but when my lads were going shop to shop trying to get some video feed evidence from local shop CCTV cameras, we revised our opinion…”

“Can we see the videos in question that give us the best views?”

“Yes…from four separate locations. We are still canvassing the near area hoping to gather additional video of the incident. One from the Hairdresser’s that clearly showed the lady leaving the Shop to walk out to stand on the footpath waiting for the green ‘walk’ sign to appear. She would be about halfway across the traffic-lane heading north up the street when this 4WD came screeching around the corner, going through the red light arrow to turn left at his location to hit her…flinging her some metres up the road. She was still alive at that point, but he continued running over her body with the front and rear on-side wheels as he went on his way…that killed her…”

All this relayed as we walked up Burwood Road past the chalk lines of where the collision occurred and then some metres further on where she was cold-bloodedly run over with both wheels. I didn’t want to hear the Station Sergeant’s description as I wanted to see the evidence before forming any opinion of the incident myself. We stepped up into a Tech Vehicle that housed a minilab on wheels, only the second time I had seen one. The first time was during the discovery of all those skeletons out amongst the Malabar sand dunes.

I walked up behind her, placing my arm around her waist, bending to kiss her on the cheek.

“You took your time, lover-boy. Hello Shells. Ruth. How are you both.”

My wife turned to greet us, a thin smile showing she was glad to see us, but not too much which could be misunderstood. I was surprised that she did not object to the show of affection…things are looking up. So it should, as the chill at on-site visitations where both of us were attending was thawing. About bloody time after so many years of official ‘at arm’s length’ carry-ons!

“My wife…” I explained to the Senior Sergeant, who nodded her understanding. “We rarely rub shoulders on a Case…um…the best video of the incident? Can you play it for me?”

I sat on a tall stool facing the larger of the bank of screens, waiting while one of Tellie’s Assistants tapped away on a keyboard to bring up the images.

“There!” She exclaimed excitedly as the video began. “Not good quality, but they rarely are. We’ll enhance a copy but keep the original as is…”

“How long does it go for?” Shelley asked as she too, swivelled around to watch the large screen.

“Around one and a half hours…but we will condense that enhanced copy. This copy includes the time the victim was getting her hair done…the important thing is that it clearly shows our Offender double parked in Belmore Street just off the intersection with Burwood Road until the victim walks out of the Salon. As she begins to cross Burwood Road with the green ‘walk’ sign he accelerates madly…as though he was surprised that he hadn’t seen her earlier…”