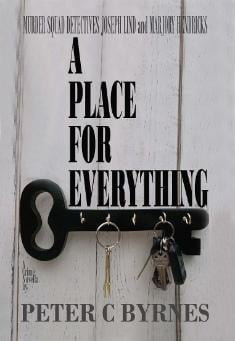 A Place for Everything
By Peter C Byrnes

'Joe. Mar. Don't get comfortable. Grab a coffee each and one for me, then make yourselves cozy in my Office, will you? And......' He turned back into his Office. '......and two on skim, thanks. For our Visitors.'

Detective Superintendent Robert Clifford Church, aka 'Abbey', had appeared at his Office door as we strolled back into the Murder Squad Room after a half an hour of swimming lanes down in the Sub-Basement Gym. An early morning practise that both Mar and I liked to partake in before commencing a new day.

This, plus another in the afternoon before we knocked off for the day. A 10K run either late that night or just on sunrise was our normal daily exercise regime. It was how-ever, taking on a new impetus as the selection criteria for the National Police Games was commencing in a couple of months.

Both Marge and I hoped to be selected.

This was a three year cyclic event. Rumours were that another once every three year event was in the pipeline. The Police versus the Fire Brigade. To be held intra-State only.

We knew that competition would be fierce. There were several persons whom we trained with, who were exceptional in both marathon running and swimming events. Two new recruits within the Murder Squad Room were also showing extreme promise. The Games early next year, were being held in Western Australia. All travel and accommodation costs were being met by the individual States out of the Law Enforcement revenue budget.

The whole thing keenly supported by the Police hierarchy, unions and each of the State Governments.

The use of the Gym for at least an hour a day had been authorised and encouraged by the Police Hierarchy, the staff and the Union. Half an hour inside rostered time in the morning and at knock off time. This extended to forty five minutes by the time that you had a shower, a rub down and a change of clothes. One and a half hours taken out of the normal ten hour shift! Back to an almost eight hour day. We could use the amenities for any amount of time on own time. This arrangement was in place long before the National Games event was even considered.

There were too many belt-busting, middle aged Cops seen patrolling the streets.

A bad Press moment for sure!

Of course, there were now complaints of too many young, buffed Cops about.

The Cop Force would never win!

The only downside as far as we were concerned, was the smell of Chlorine often wafting through the Office area!

We settled into comfortable chairs around a low Coffee Table in Abbey's Office. The fact that we had not adjourned to one of the small Conference or Meeting Rooms on our floor was not lost on me. This was supposed to be an informal little chat.....with the two more formidable females from the DPP's Office.

This was not a friendly little chat no hard a veneer was placed on it.

The look on Mar's face seemed to indicate that she too, was of the same opinion.

Jennifer Cartwright, the Chief Deputy Prosecutor from the DPP's Office was already settled. All business in a severe dark grey pants suit and pale silk blouse. Jennifer Stevenson sat beside her in a more relaxed manner. Again a modest Business Suit though the tight skirt caused the hem to rise every time that she endeavoured to cross her legs. Good looking legs sheathed in black stockings. High heel killer shoes apparently, by the way that+my partner was looking at them. I was just enjoying the leg view! We knew Stevenson from previous DPP Conferences. She was the caged lion let loose on the more involved and sensational Court cases. Both had a yellow pad and pencil at the ready. A mobile phone on 'record' on the Coffee Table between us.