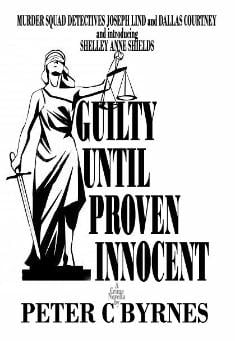 This is the 19th story in the Murder Squad Detective Joseph Lind serial Collection.

Two murders are committed within a short period of one another. Both quickly result in Suspects being held for several days before being released due to insufficient evidence and an admission by the Police that the evidence collected would indicate that the persons had not committed the crimes. No other suspects for these murders are on the horizon!

However, for whatever reason, the Media has drawn conclusions of guilt based on the persons previous bad records or prior well-documented life-styles. This Media blitz seems to cause adverse reactions from the Public based purely on the slanderous nature of various parts of the Media. TV. Print and Radio. Even when another party is arrested and admits guilt, the various Media Organisations are averse to publicise their incorrect reporting of the two cases. One of the killings has possible links to one of the "Major Players" in the Sydney underworld. The disappearance of this "Colourful Racing Identity" means that one of the murder cases sinks into the mire of a Cold Case. Perhaps never to be satisfactorily resolved.

As always with these things in an Office environment, the responsibility of 'taking the hat' around fell on the females of the Murder Squad Room. Peta Daniels did a sterling job in this regard as the Police HQ Building, The Coroner's Office and Morgue and the Parramatta Police Building were heavily canvassed.

Every person who donated to the rapidly expanding "kitty" was suitably recorded so that their generosity would not go unknown.

And those with short arms and long pockets were regularly reminded of their lack of largesse!

It helped that both parents were held in high regard throughout the various Sections of the Force where their expertise and speciality were well respected and they, as fellow colleagues, hugely liked and admired.

In the end, with some judicious bartering, three car capsules, three Bassinets and three Cots were delivered to the Sarvich-Hendricks' home.

Along with a mountain of packets of disposable nappies!

A small band of close friends and family had extended Marge's humble house with special emphasis on a large Nursery being provided. It would also double one day, as a three-bed Bedroom and then a double Bedroom for the two girls. The existing double garage had been extended to provide a new Master Bedroom, Walk-in Robe and Ensuite Bathroom adjacent to the Nursery Room. A new lightweight double Carport at the front of the house nowaccommodated the two cars belonging to the family.

One now a comfortable People-mover.

A new Kitchen had been installed and the Living area extended with the addition of a Family Room that doubled in size when concertina doors were opened onto a large, rear deck that corralled an old, large Frangipani tree at its centre.

The perfume when the ancient tree was in full bloom wafted gently throughout the house.

Mar and the three Bubs spent a little more time in Hospital than had been originally planned. Consequently, I would drop in on my way to work every morning just to check up on things. Dutifully reporting to "Muscles" in a quick phone conversation as I drove the kilometres to the Parramatta Police Building. As though he needed my updates, as he too spent an inordinate amount of time at the Hospital, even extending his Lunch Breaks to make the journey!

Who could blame him?

Dead bodies needing his forensic examination could wait; though the other Forensic Pathologists did a mountain of overtime to cover for the new Dad!

But what else would a deliriously happy father do but spend an inordinate amount of time at the Hospital? Except ponder on how his life had suddenly been set out for him. He uncertain and apprehensive at such an age, to be able to be a good and successful father. Now having to share his entire life and time with not one, but now four demanding human beings!

I guess this was the subconscious bane of all new husbands...and fathers...unsure of their ability to be acceptable fathers through the coming years.

Get drunk on my stock of red wine nearly every second night as he could not bear to be alone in an empty house...and what are friends for but to help out each other?

by David Dwan Minor Mayhem is a supernatural horror novel blending the perceived normality of everyday life with a paranormal undercur......

by Stellen Qxz For the world’s most dangerous bad guys and bad gals, Gabin Endre Rocc is a good man to have on their side. Ruthle......