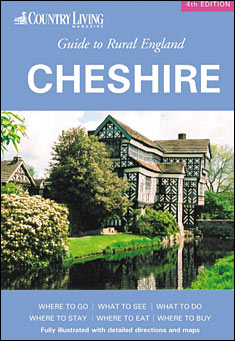 Cheshire has received a bad press from writers such as Jeremy Clarkson and AA Gill who have portrayed the county as a kind of Footballer’s Wives territory, packed with Porsches, bloated with bling and mindlessly devoted to conspicuous consumption. It’s certainly true that more millionaires live in this captivating corner of the country than anywhere else in England. Britain’s richest peer, the Duke of Westminster, with an estimated wealth of £5600 million, lives on a large estate just south of Chester. And more champagne is quaffed here than anywhere else in the UK.

But that’s only a tiny part of the county’s 2000-year-long story, which effectively began with the arrival of the Romans. But even before the 20th Legion established the garrison of Deva in AD70, Cheshire was famous for its salt mines. By the time of the Domesday Book, the salt towns, or ‘wiches’ - Nantwich, Northwich and Middlewich - were firmly established. The process at that time involved pumping the salt brine to the surface and boiling it to produce granular salt. In 1670, huge deposits of rock salt were discovered and these are still being mined, mostly for use in keeping Britain’s roads free from ice.

In the early 1700s, in the course of his Tour through the Whole Island of Great Britain, Daniel Defoe came to Chester by the ferry over the River Dee. He liked the city streets, “very broad and fair”; admired the “very pleasant walk round the city, upon the walls”, disliked its cathedral, “built of red, sandy, ill-looking stone”, but had nothing except praise for its “excellent cheese”. Cheshire cheese has been famous for generations. John Speed, the well- known Elizabethan map-maker and a Cheshire man himself, noted: “The soil is fat fruitful and rich....the Pastures make the Kine’s udders to strout to the pail, from whom the best Cheese of all Europe is made”. Later, some enthusiasts even promoted the idea that the name Cheshire was actually short for cheese-shire.

One thing that visitors don’t get to see is the county’s best known character, the grinning Cheshire Cat. The expression ‘to grin like a Cheshire cat’ was in use long before Lewis Carroll adopted it in Alice in Wonderland. Carroll spent his childhood in the Cheshire village of Daresbury and would have regularly seen the local cheeses moulded into various animal shapes, one of which was a grinning cat.

“Small enough to explore easily on foot, but big enough to be wonderfully cosmopolitan”, say Chester‘s tourism people. This pleasing old city occupies a strategic site on the River Dee close to the Welsh border that was important even before the Romans arrived in AD70. They based a large camp here and called it Deva after the Celtic name for the river. It was during this period that the splendid city walls were originally built – two miles round, and the most complete in the country.

In Saxon times ‘Ceastre’ became the administrative centre of a shire, and was the last major town in England to fall to William the Conqueror during his dreadful Harrowing of the North. William pulled down half of Chester’s houses and reinforced the message of Norman domination by building a castle overlooking the Dee.

Subsequent Earls of Chester (the present Prince of Wales is the current one) were given a free, firm hand in dealing with the local Saxons and with the still rebellious Welsh who continued to make a nuisance of themselves right through the Middle Ages. In return for its no-nonsense dealing with these problems, Chester received a number of royal privileges - borough status, a licence for a market and, around 1120, the first commission in England for a Sheriff, long before his more famous colleague in Nottingham received his.