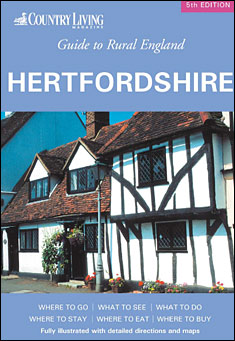 The novelist EM Forster, who lived in the county, described Hertfordshire as “England at its quietest; England meditative”. When he wrote that in the 1950s, the county’s population was just over 600,000; it has now topped one million. The more southerly towns expanded as residential areas for London commuters, and after the Second World War, with an acute housing shortage in the blitzed capital, New Towns such as Stevenage were created to cater for the thousands of Londoners who had lost their homes.

But the centre of the county is still largely agricultural and the southern edge lies within the precarious protection of the Metropolitan Green Belt. There is still some excellent walking and splendid scenery, most notably within the National Trust’s Ashridge Estate, where the woodlands and downlands are home to a wide variety of wildlife, and the views from the highest points are magnificent.

The strongest historical ties in the county are to be found in the ancient city of St Albans, while Hatfield combines old and new elements: it was one of the designated New Towns, but the old town survives, along with the magnificent Hatfield House and part of the medieval Royal Palace, which was the childhood home of the future Elizabeth I.

Close to Hatfield lies Welwyn Garden City, conceived by Ebenezer Howard and built in the 1920s with the aim of providing working people with a pleasant and attractive place to live, with easy access to the countryside.

One of the best known monuments in Hertfordshire is the Eleanor Cross at Waltham Cross, one of 13 such crosses erected by Edward I to commemorate the resting places of the funeral cortege of his Queen, Eleanor of Castile.

The old Roman road from St Albans to Colchester forded the river here, and some nine centuries later, the Saxon King Edward the Elder, built a castle to protect the crossing. His fortress has disappeared but the great mound on which it was built survives in the town’s spacious Castle Gardens. In about 1060, the whole town was sold to the Bishops of London, hence its name. In medieval times Bishop’s Stortford was a stopping place on the route between London and both Newmarket and Cambridge and became famous for its many hostelries. Even today, the town boasts three inns dating back to the 15th and 16th centuries, as well as several timber-framed buildings. In the 20th century, the building of Stansted Airport, just seven miles away, brought the town within easy reach of Europe and beyond.

In the compact town centre markets are still held twice a week, on Thursdays and Saturdays, as they have been for centuries. Standing high on a hill, St Michael’s Church dominates the surrounding countryside. Inside the large, light building there are 18 elaborately carved misericords in the choir stalls; it is believed that they came from Old St Paul’s Cathedral in London. Elsewhere, a memorial commemorates the life of Cecil Rhodes, son of a former Rector. The great imperialist’s exploits are also documented in the house where he was born, Nettlewell House, now the Rhodes Museum and Commonwealth Centre.