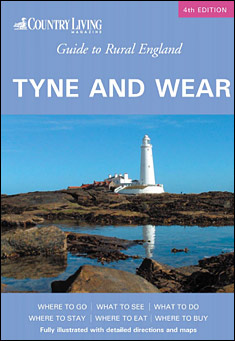 The area inland from the north bank of the Tyne is mostly built up, though there are still tracts of rural calm and beauty. Dominating this region is Newcastle-upon-Tyne, one of Britain’s most important cities. It’s metropolitan area stretches out as far as the small towns of Tynemouth and Whitley Bay to the east, Longbenton to the north, and Throckley to the west. Industry made this part of Britain. It is real Geordie country, steeped in hard work and refreshed by Newcastle Brown Ale. (Why Geordie? The most likely reason is that Newcastle was the only town in the region to take the side of King George I, keeping the Jacobite rebels outside the gates.) People found work in coalmines, great engineering works and shipbuilding, and never travelled far to spend their leisure time or holidays. They headed for Whitley Bay or Tynemouth, eight miles east of the city centre on the North Sea coast, but a lifetime away from their harsh living and working conditions. Alternatively, they could head north into rural Northumberland, one of the UK’s most beautiful and unspoilt counties. The area south of the Tyne is largely industrial in character, encompassing large conurbations such as Gateshead, Sunderland and South Shields. But there is still plenty to see, as these places, just like Newcastle, are rediscovering themselves and their heritage. And open spaces and countryside, especially to the south, are still there to be explored.

Newcastle, the region’s capital, is rapidly becoming one of Britain’s most exciting cities, and contains many magnificent public buildings and churches. Situated above the River Tyne, it is linked to its neighbour Gateshead by a series of road and rail bridges.

The Tyne Bridge has long been Newcastle’s most famous symbol. Opened in 1928, it bears an uncanny resemblance to the Sydney Harbour Bridge, which isn’t surprising as both were designed by the same civil engineering company. The city has several other well-known bridges. The Swing Bridge, which swings open to let ships through dates from 1876 and stands on the site of the original Roman bridge and its successors - The High Level Bridge was designed by Robert Stephenson and was opened in 1849; it carries both road and rail traffic high above the Tyne.

Newcastle has enjoyed a varied and colourful history and in its time has acted as a Roman frontier station, a medieval fortress town, an ecclesiastical centre, a great port, a mining, engineering and shipbuilding centre and a focal point of the Industrial Revolution that was to change the face of the world.

Thanks to the Metro Rapid Transport System, opened in 1980, the city and its surroundings are closely linked. It is the second largest underground rail network in Britain, linking South Shields and Gateshead, to the south of the city, with the northern coastal areas of Tynemouth and Whitley Bay. It also links up with Newcastle International Airport and takes just 20 minutes to get to the city centre. In 2002, the system was extended to Sunderland, 15 miles away, creating a regional network that can compete with some of the major underground and rapid transport systems in Europe.

The Quayside is the first view of Newcastle for visitors from the south, whether travelling by road or rail. The area is the symbolic and historic heart of this elegant city and boasts some 17th-century merchants’ houses that mingle with Georgian architecture. It has been a focal point for activity since the first bridge was built across the river in Roman times and has been revitalised in recent years with some sensitive and imaginative restoration of the river front area. There are now a number of lively cafés and wine bars along with craft stalls, street entertainers and a regular Sunday market.