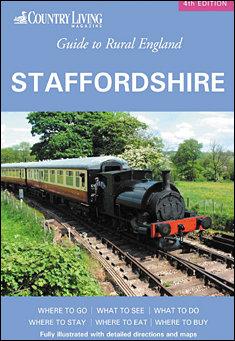 The southwest of Staffordshire encompasses many changing landscapes, from the busy industrial towns of Stafford and Burton-on- Trent to the peace and quiet of Cannock Chase. Along with the Hednesford Hills, the Chase provides a wonderful open area of woodland and moorland that is one of the county’s great recreational centres. Well- supported by an interesting and informative visitors’ centre, the Chase is a must for anyone visiting this part of Staffordshire. The southeast of the county, althaough lying close to the Black Country – the depressing product of the heavy industrialisation of the 18th and 19th centuries – has managed to escape in the main. One legacy of the era and a feature throughout the whole of Staffordshire, however, is the canal network. Built to link Birmingham with the Trent & Mersey Canal, the less well-known Coventry Canal and the Birmingham & Fazeley Canal pass through tiny villages and hamlets and the towpaths provide the opportunity to walk in some unexpectedly scenic countryside.

Extending along the southern edge of the Peak District, the Staffordshire moorlands certainly rival their neighbour in terms of scenic attraction. The undulating pastures of the moorlands, along with the fresh air and ancient weather-worn crags, make this the ideal place to walk, cycle or trek. It is also an area full of character, with charming scattered villages, historic market towns and a wealth of history. The Industrial Revolution also left its mark on the landscape, though the two great reservoirs of Rudyard and Tittesworth, built to provide a water supply to the growing industry and population of the Midlands, now offer peaceful havens for a wide variety of plants, animals and birds, as well as recreational facilities such as fishing and boating.

The area around Stoke-on-Trent is famous the world over for its pottery industry. Originally centred on the five towns of Stoke, Tunstall, Burslem, Hanley and Longton, the Potteries were at the heart of the Industrial Revolution. Both coal and clay were found locally, which gave rise to the start of the industry, though imported clay from Cornwall was later used - but it was the foresight and ingenuity of men such as Wedgwood and Minton that really turned the cottage industry into production on a much larger scale. To support the industry in and around the centre, a network of canals and, later, railways was begun. The Trent & Mersey Canal, built by James Brindley with the support of Wedgwood and his friend the Duke of Bridgewater, was finally completed in 1777 and made possible navigation from coast to coast, between the busy ports of Liverpool and Hull. Together, the Trent & Mersey Canal, the Staffordshire & Worcester Canal, begun in the same year, the Shropshire Union Canal to the west and the Middlewich branch of the Llangollen Canal, form a wonderful four counties ring that can be undertaken wholly or partly by boat.

The county town of Staffordshire has its origins in Saxon times, but the most impressive site is Norman. At Stafford Castle visitors can follow the castle trail, wander around the medieval herb garden and explore the visitor centre built in the style of a Norman Guardhouse. The Castle grounds are often used for historical re-enactments by such groups as the Napoleonic Society, and are the site for Sealed Knot battles as well as other outdoor entertainment. Stafford originally had a medieval town wall, which evidence of can still be seen today in the names of the town’s main streets. However, only the East Gate remains of the structure. Stafford lies on the banks of the River Sow, and Green Bridge marks the site of the ancient ford across the river. There has been a bridge on this spot since the late 1200s, but the gate in the town’s medieval walls that was also at this point was demolished in 1777. Just to the east of the Bridge is Victoria Park, opened in 1908 and later extended to incorporate land reclaimed from the River Sow. There are many pleasant walks through the Park, which includes a mill pond and a weir, in particular to the Windmill at Broad Eye. Built in 1796 by John Wright, the mill moved over to steam power in 1847 and continued to be used until 1880. Like many towns today, Stafford has its busy shopping streets and also an impressive shopping centre. However, many picturesque cobbled lanes still remain and provide the visitor with a quiet and relaxing contrast to the hurly-burly of the 21st century. Of particular note are Church Lane, with its timbered buildings, and Mill Street, with a varied array of shops, restaurants and pubs.